NEN is joining the Bio-Based Live Europe Congress as an exhibitor. The congress is held at University of Amsterdam, Science Park on the 31st May and 1st June 2017.

At 4.15pm on Day One, NEN will host the Standards and certifications Roundtable and at 12noon on Day Two, they will host the session ‘Certification: Using Standards and Labelling to Communicate important characteristics of bio-based product’ allowing for learning and discussion between our senior attendees and a fantastic insight into what is happening in the industry right now.

With this invite, we are offering you 15% off of your full access pass Contact us for your discount code.

OR, if you’re employed by a Brand or Retailer then you can attend for free by clicking here.

NEN is participating in the World Biomass Markets in Amsterdam, 27th to 29th March. On Monday 27th March, during the World Bio Brands Markets, NEN will give a presentation titled: Shaping the bioeconomy with bio-based content and sustainable biomass certification. In this lecture, Harmen Willemse will discuss the two certification systems: Better Biomass and Bio-based content, focussing on how they enable credible claims regarding important characteristics for bio-based products and biomass for energy applications.

On the 28th and 29 of March, NEN will have a stand at the World Bio Markets exhibition, where our team will be available to discuss the opportunities of Better Biomass and Biobased content certification. Come visit us in our booth or schedule 1-2-1 private partnering meetings using the WBM Partnering App!

The event will be preceded by a workshop on Public Procurement of Bio-based products.

Better Biomass is the international certification system for solid, liquid and gaseous biomass. The Better Biomass certificate is used to demonstrate the sustainability of the biomass used for bio-based products, fuels or energy. The certification system has originally been established (and recognized) to demonstrate compliance with the Renewable Energy Directive (RED) and recently expanded its scope to include bio-based products.

During the workshop the participants will be informed about the underlying sustainability criteria of the certification system and how they can demonstrate compliance. Case examples of certified companies will be presented and the possibilities to use the Better Biomass in (public) procurement procedures will be discussed. The workshop will conclude with an informal part where participants can address experts for individual questions, or exchange ideas with other participants.

The workshop is taking place on 27 October 2015 in Brussels from 16:00 pm – 18:30 pm. Places are limited. Pre-register here for participation. Formal invitations will be sent to a selection of pre-registered candidates. Participation without invitation is not possible.

17:00 Issuing of new Better Biomass certificates
Reception and opportunity for exchange with experts 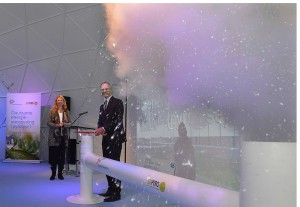 On the 6th of May in Delfzijl, the Netherlands, Eneco received the Better Biomass certificate for her new biomass plant Bio Golden Raand. The certificate was issued by Jorn Bronsvoort, director of QS Certification. With this certificate, Eneco demonstrates that the plant in Delfzijl, which produces electricity from waste wood, complies with the international criteria for sustainably produced biomass.

‘Better Biomass’ is the new name for the certificates that are issued based on NTA 8080 to companies which produce, trade or process sustainable biomass. Bio Golden Raand is the first biomass plant in the world which has obtained the Better Biomass certificate by its new name.

Eneco has agreed with its biomass suppliers that they will all obtain the Better Biomass certificate before the end of 2015. This satisfies WWF, with which the energy company has a partnership. Arjette Stevens, Senior Advisor Biomass at the WWF, emphasizes the importance of certification: ’WWF welcomes this first important step, by which Eneco show that it is taking the lead in the Netherlands in the use of really sustainable resources for energy production. We are happy that Eneco chooses for waste wood instead of felling trees. The use of waste reduces the pressure on the forests.’